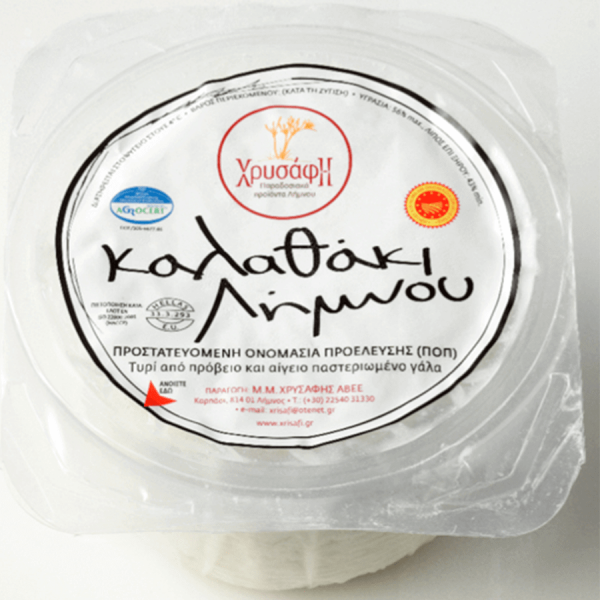 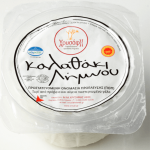 Kalathaki Limnou is a white cheese, similar to Feta, made from fresh sheep and goat milk. It has EU Product of Designated Origin (PDO) certification to show that it comes from a unique geographical area with its own agricultural importance (the island of Lemnos, Northern Aegean Sea). Sheep and goats are free to graze in uncultivated regions, on a large variety of wild grasses, in the open air of the island. In this way, the flora and the microclimate of the island determine the flavor of the milk. That, combined with the traditional techniques and the quality control system applied by HRYSAFIS Dairy, determines the individual profile of Kalathaki Limnou. Kalathaki Limnou owes its name to the production method itself. “Kalathaki” means small basket. According to the traditional method, the cheesemaker puts -by hand- the curd mass into small baskets, where the cheese takes its final characteristic shape. After that, he submerges the baskets in brine, where the cheese ripens for 60 days. While similar in texture with feta, Kalathaki Limnou has a milder and very distinctive flavor. Kalathaki Limnou HRYSAFIS was prized with the “Golden flavor Award” in the Dairy Festival that took place in Athens in October 2009.

This website uses cookies to improve your experience while you navigate through the website. Out of these cookies, the cookies that are categorized as necessary are stored on your browser as they are essential for the working of basic functionalities of the website. We also use third-party cookies that help us analyze and understand how you use this website. These cookies will be stored in your browser only with your consent. You also have the option to opt-out of these cookies. But opting out of some of these cookies may have an effect on your browsing experience.
Necessary Always Enabled
Necessary cookies are absolutely essential for the website to function properly. This category only includes cookies that ensures basic functionalities and security features of the website. These cookies do not store any personal information.
Non-necessary
Any cookies that may not be particularly necessary for the website to function and is used specifically to collect user personal data via analytics, ads, other embedded contents are termed as non-necessary cookies. It is mandatory to procure user consent prior to running these cookies on your website.
SAVE & ACCEPT